What is Ceylon Sapphire?

Typically, when discussing variations of sapphire, the differences stem from their individual colours as determined by the concentration of minerals in their makeup. Like any other sapphire, Ceylon sapphires are derived from a crystallised form of aluminium oxide known as corundum.

However, Ceylon sapphires are known for having a brighter and more vivid shade of blue than their regular blue sapphire counterparts, making ceylon engagement rings a particularly sought after proposal method. Their uniqueness in color and geographical rarity lend significantly to their value in comparison to other kinds of sapphire. 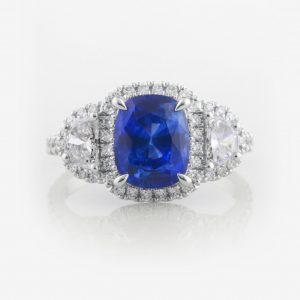 Ceylon sapphires are very valuable, as they can only be found in mining deposits in Sri Lanka, hence their name. Sri Lanka is considered to have the highest quality sapphires available, narrowly beating other places such as Kashmir and Burma.

With the combination of a rich history and such a rare, high-quality product, it’s easy to understand why Ceylon engagement rings are considered to be so valuable.

Given that Ceylon sapphires are the rarest and most valuable sapphires available, they can prove to be quite a costly venture. However, they also make quite a profound statement when incorporated into an engagement ring.

Not only do they have a high asking price owing to their high demand, but they are also an exceptional quality gemstone with an intense, mesmerising colour that’s sure to put a smile on anybody’s face. They work best with bands that have a more neutral colour such as white gold, silver and platinum,  as these alloys will bring out and emphasise the colour of the gemstone. 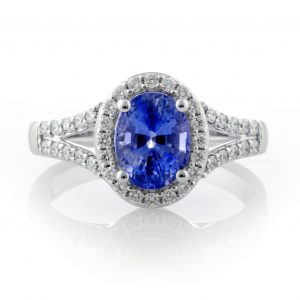 How much is Ceylon sapphire worth?

Ceylon sapphires are exclusive to Sri Lanka, making them incredibly rare. Sri Lanka is a country renowned for its high quality gemstone deposits, to the point where it was referred to as Rathnadeepa, which translates to “Isle of Gems” in Sinhalese. It is estimated that approximately 90% of Sri Lanka’s landmass is composed of gem-bearing pre-Cambrian rock.

Ceylon sapphires have been used in royal jewellery, such as the Imperial Crown of Russia worn by Queen Catherine II of Moscow, the Ceylon blue sapphire brooch given by Prince Albert to Queen Victoria on the eve of their wedding  (also worn by queen Elizabeth II) and Princess Diana’s renowned engagement ring, currently worn by Catherine, Duchess of Cambridge. One of the most well-known examples of Ceylon encrusted jewellery is the ‘Heart of the Ocean’, inspired by the 1997 James Cameron film Titanic.

Ceylon sapphires, like all sapphires in general, are known for being extremely durable. They rank a 9 out of 10 on Mohs scale of hardness, a scale developed by German geologist and mineralogist Friedrich Mohs in 1812. Not only are sapphires extremely durable against abrasions, they are very chemical resistant as well.

How do I identify a Ceylon sapphire?

There are, of course, the usual factors that determine a Ceylon sapphire engagement ring’s value i.e. the size, shape, clarity, hue, saturation, etc. In addition to these, there are other observable traits that can help determine whether or not the gemstone is a fake.

Of course, you can avoid this by purchasing from a reputable jeweller such as Holdsworth Bros. who have been in the business since 1884. Ceylon sapphires are some of the most commonly imitated gemstones. From glass to synthetic sapphire there are dozens of potential pitfalls. However, if you are still unsure, there are some alternative methods: 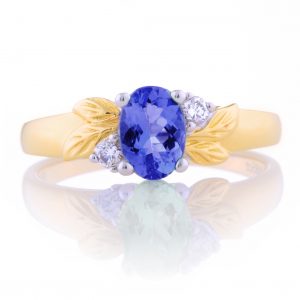 How much are Ceylon engagement rings? 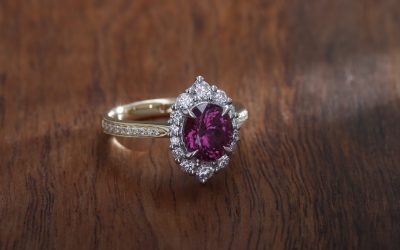 Rhodolite Garnet Ring and why it might be the engagement ring you’re looking for Rhodolite garnet rings are a great choice for any kind of ring, even if they’re not as popular as diamonds or sapphires. Various silicate materials combine to form a garnet, and rhodolite... 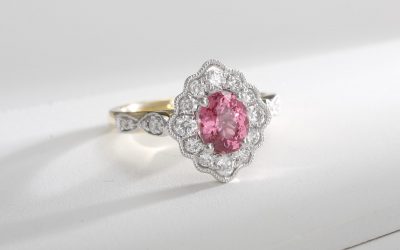 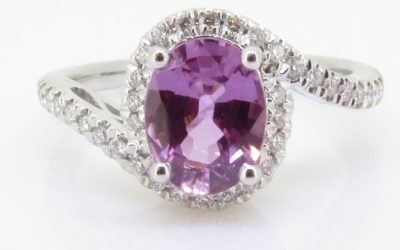 Purple Sapphire Engagement Rings Purple sapphire engagement rings?  Seriously?  Absolutely.  Sure, it’s not as conventional as the good old-fashioned blue sapphire, but isn’t that what makes them so great in the first place?  Purple is certainly an evocative colour...